Jim Pallotta has long admired Sir Alex Ferguson. The Roma co-owner has sought out the advice of the wily Scot ever since investing in the Serie A giants back in 2011.
It was that thirst for stability which led to him appointing Rudi Garcia, 39, as manager two years later, coincidentally, when Ferguson called it a day after 26 years at United.
Pallotta used Ferguson as a sounding board – even inviting him to watch Roma’s Champions League clash with City in 2014 – and that mutual respect has seen their friendship again make the headlines.
Ahead of Roma’s famous comeback against Barcelona, Ferguson visited his pal at the Hotel de Russie, where the team were staying, before getting changed into his blue suit and making his way to the Stadio Olimpico with wife Cathy.
Ferguson has mixed memories of the stadium – United were humbled by Barcelona in the Champions League final in 2009 – but he may feel a little differently after witnessing one of the biggest shocks in the competition’s history. 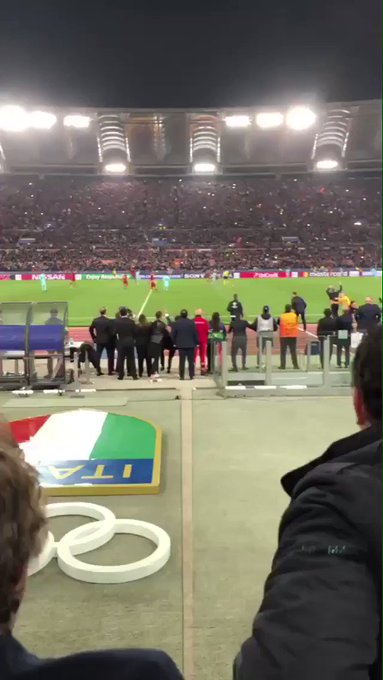 Twitter Ads info and privacy
With Roma 4-1 down on aggregate, the Giallorossi somehow overturned a three-goal deficit to book their place in the semi-finals of the competition for the first time in their history.
The days of scouting players may be a thing of the past – Ferguson once missed a League Cup game against Scunthorpe to watch a young David de Gea – but the Scot will have been impressed by a number of Roma’s heroes.
And given all the ambitious talk surrounding Barcelona defender Samuel Umtiti in recent weeks, it was actually Kostas Manolas who, literally, rose to the occasion with the killer third goal and a fine display at the back.
Umtiti is currently playing a game United have finally become wary of – being used as a bargaining chip when a player wants a new deal at his current club – and this was not the right time to have one of his worst performances yet for Barca.
Manolas, on the other hand, played without fear. The Greece international is strong in the air, fast over 100 metres and not afraid to boot the ball out for a throw-in when needs must.

After four seasons at the club, the 26-year-old has etched his name into Roma’s history following that brilliant header – crying as the fans sang anthem ‘Grazie Roma’ at full-time – and he may never find such cult status at another club.
The father-of-two repaid that loyal support by signing a new five-year deal before Christmas and it is clear he is surrounded by the right people with a camp who have his best interests at heart.
“I get a lot of inquiries about interest for Manolas from many different clubs,” a source close to the player told MEN Sport.
“Unless there are advanced negotiations and concrete interest, it is not wise to talk about possible interest.”
United may currently have five centre-backs on their books, having only signed Victor Lindelof 10 months ago, but they are keeping an eye on a number of options.

Manolas was on Jose Mourinho’s radar in his final season at Chelsea and David Moyes had even tipped him as a potential long-term replacement for Nemanja Vidic following an impressive display for Olympiacos in the Champions League.
Moyes’ interest went back to the winter of 2011, when he was still manager of Everton, and he could see that Manolas had a big future ahead of him.
“He’s a young boy we have looked at for a while, and we know quite a lot about him,” he said of the AEK Athens defender at the time.